I am interested in ways to get kids coding from an early age.  I want my kids to be more than just consumers of technology and programming is one of the key building blocks.  At Maker Faire, I saw a tutorial and environment for an open source introductory programming that I hadn't see before -- Blockly.  Blockly is a visual programming language from Google. They have several sample projects to play with such as Blockly Puzzle and Turtle Graphics.

They also have a developed a maze tutorial for kids to learn to code. 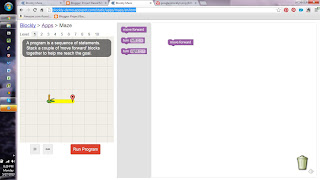 My Kindergartner tested it out.  Once he understood how to drag and drop and connect the commands he was able to help the person get through the maze for the first two levels.  As you progress, it increases in difficulty and adds if and repeat commands. 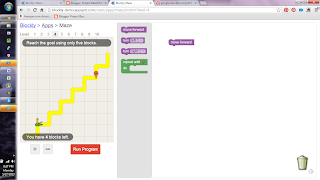 Test it out and let me know what you think!